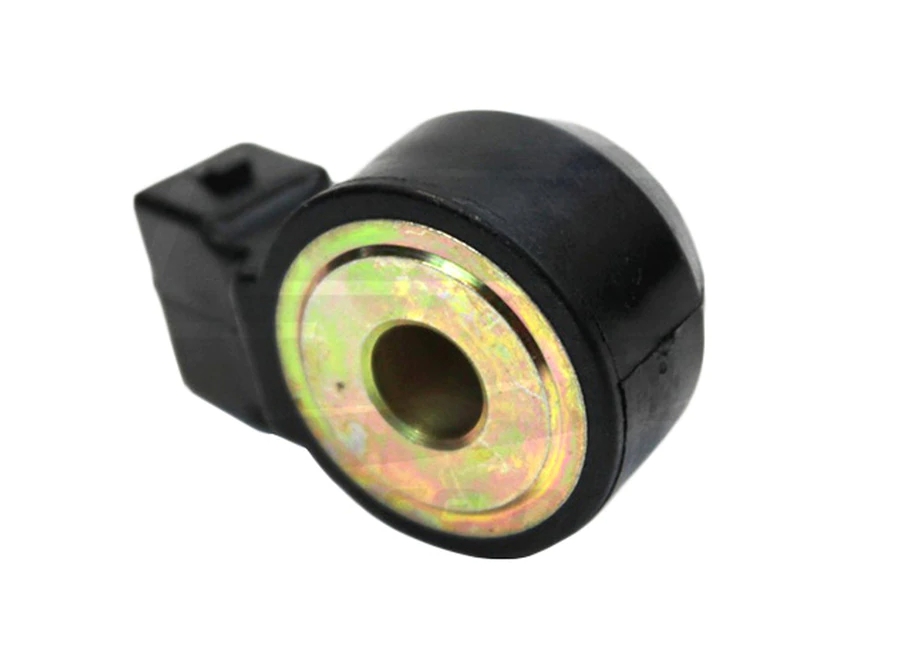 The knock sensor is used to monitor the degree of knocking during operation of a gasoline internal combustion engine. The sensor is installed on the engine block. It is an important component of the engine management system because it is allows for maximum engine power and fuel efficiency.

The degree of detonation is understood as the part of the fuel-air mixture that burns with detonation. Detonation, or correctly knocking combustion, occurs when the part of the fuel-air mixture that is distant from the spark plug heats up and ignites spontaneously as a result of being pressed by the flame front. Detonation is accompanied by acoustic signs – a metallic knock in the crank mechanism.

The principle of operation of the knock sensor is based on the piezoelectric effect. A piezoelectric plate is included in the design of the sensor, in which a voltage arises at the ends when detonation occurs. The greater the amplitude and frequency of oscillations, the higher the voltage. When the voltage at the output of the sensor exceeds a predetermined level corresponding to a certain degree of knock, the electronic control unit adjusts the characteristic of the ignition system in the direction of decreasing the ignition timing. Thus, the optimal performance of the system for specific operating conditions is achieved.

In the event of a knock sensor malfunction (no signal), the corresponding warning lamp on the instrument panel lights up, while the engine continues to run.

When you peep into the undercarriage of your Nissan Maxima, you’ll see various components in the form of tubes shaped in different ways. All these tubes make up your entire

Does your Nissan Maxima squeal whenever you step on the brake pedal? This squeal can have a variety of causes, and among the primary braking components in your car that

Right behind the grille under the hood of your Nissan is an important auto component –the Nissan 200SX radiator. It’s the radiator which utilizes the air that goes through the